Chemotherapy uses drugs to treat cancer. Whether they are given intravenously, as an injection, or by mouth, they are designed to spread throughout the body to treat cancers that may have spread to locations  beyond the thymus.

This type of treatment is called systemic, compared to radiation which is aimed at specific areas. Unfortunately, because the drugs reach throughout the body, they also affect non-cancerous cells, which can result in debilitating side effects.

Chemotherapy is typically used in these situations:

Chemotherapy is sometimes combined with radiation to help it work better. This is known as chemoradiation or chemoradiotherapy. 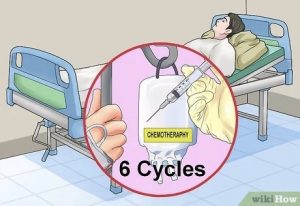 Doctors give chemotherapy in cycles: a  period of treatment followed by a rest period to allow the body time to recover. Chemotherapy cycles generally last about 3 to 4 weeks, and treatment typically involves 4 to 6 cycles. Chemotherapy is often not recommended for people in poor health.

The drugs prescribed, as well the dosage,  frequency and duration of treatment, is called a regimen. Some regimens use individual drugs. Others are several drugs used in combinations.  Drugs used in combination can increase their effectiveness.
There are first-line and second-line regimens. First-line regimens are the recommended treatments  based on case studies and research. Second-line treatments  are recommended only after a first-line  treatment  has failed, stopped working, or has side effects that aren’t tolerated. Second-line treatment also play a role in clinical trials. 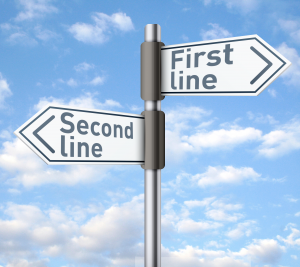 Several other  drugs may be considered as a first-line treatment for thymomas and thymic carcinomas, including:

Because Thymomas may  recur after several years, long-term follow-up and monitoring are recommended. For patients with metastatic disease, chemotherapy is the primary treatment for unresectable or metastatic thymoma or thymic carcinoma.

Combination therapies for metastatic disease include the cisplatin,  doxorubicin, and cyclophosphamide, with or without vincristine (with different doses and plan), or single agent etoposide.

Additional regimens that have been studied include carboplatin and paclitaxel, as well as pemetrexed and irinotecan with cisplatin or carboplatin.

About half of Thymic carcinoma patients are diagnosed with inoperable and metastatic disease for which platinum-based chemotherapy is the recommended first-line systemic treatment. There are no established standard second-line treatments for relapsed or recurrent thymic carcinomas.

A drug called octreotide (Sandostatin® and Sandostatin LAR®) may also help some people with advanced thymoma. This is not a typical chemo drug. It’s a man-made version of a hormone called somatostatin. The drug works in some cases because it attaches to the thymoma cells and causes them to stop growing or die. Side effects of this drug can include pain or burning at the injection site, stomach cramps, nausea, vomiting, headaches, dizziness, and fatigue. It is also linked to increased risk of gallstones. Normally, an octreotide scan is performed first to determine if the cancer cells are receptive to the drug.

Targeted therapy is a treatment that targets the cancer’s specific genes, proteins, or the tissue environment that contributes to cancer growth and survival. This type of treatment blocks the growth and spread of cancer cells while limiting damage to healthy cells. 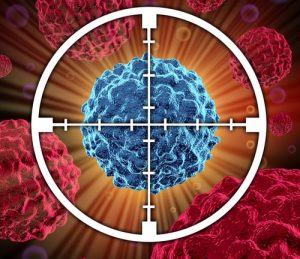 Not all tumors have the same targets. To find the most effective treatment, your doctor may run tests to identify the genes, proteins, and other factors in your tumor. This helps doctors better match each person with the most effective treatment whenever possible. In addition, research studies continue to find out more about specific molecular targets and new treatments directed at them. 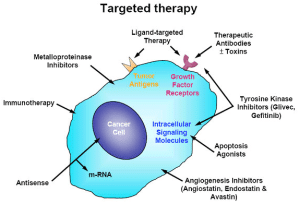 Immunotherapy is  treatment that uses the patient’s immune system  to fight cancer. Substances made by the body or made in a laboratory are used to boost, direct, or restore the body’s natural defenses against cancer. This cancer treatment is a type of biological therapy.

Immune checkpoint inhibitor therapy is based on a protein PD-1 on the surface of T cells of that helps keep the body’s immune responses in check, and is found on some types of cancer cells. When PD-1 attaches to PD-L1, it stops the T cell from killing the cancer cell. PD-1 and PD-L1 inhibitors keep PD-1 and PD-L1 proteins from attaching to each other. This allows the T cells to kill cancer cells.

Pembrolizumab (Keytruda) is a type of PD-1 inhibitor that is being studied in the treatment of Thymic Carcinoma and is showing promise.

Signaling pathways described a series of chemical reactions in which a group of molecules in a cell work together to control a cell function, such as cell division or cell death. A cell receives signals from its environment when a molecule, such as a hormone or growth factor, binds to a specific protein receptor on or in the cell. After the first molecule in the pathway receives a signal, it activates another molecule. This process is repeated through the entire signaling pathway until the last molecule is activated and the cell function is carried out. Abnormal activation of signaling pathways may lead to diseases, such as cancer. Drugs are being developed to target specific molecules involved in these pathways. These drugs may help keep cancer cells from growing.

You can ask your doctors about any of these options. You will find articles about these in the Research Library section of the website.

The other option patients have is to enroll in a clinical trial. You’ll learn about that in the next page.

The Foundation for Thymic Cancer Research is a tax-exempt, non-profit 501(c)(3)  organization registered in the State of New York and donations are tax exempt as allowed by the Internal Revenue Code.